Major and Minor Releases of SDL Tridion has new features and module updates, What are all the features added or removed from the SDL tridion 2009 to 2011 and 2011 to 2013 SP1.
Is there any way we can find the comparison of API updates, Technology updates, Platform updates, Architecture Update,.etc.,.
Overall how can we find the Functional and Technical updates among these versions?.

I hope the below picture helps with a very high level comparison of various SDL Tridion version from R5.x through 2013 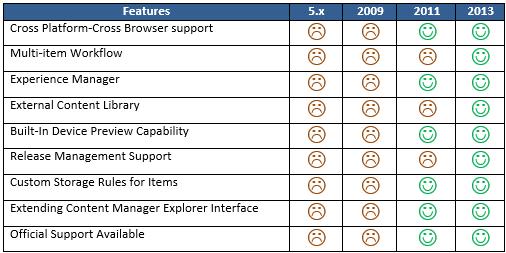 You can find 'Release notes' associated with each version of SDL Tridion in the online documentation.

This document is described as:

The release notes describes new features, changed features, what has been fixed in this release, and what the known issues are.

This documentation is quite detailed, including things such as (for SDL Tridion 2013 SP1):

Hopefully these cover the 'Functional and Technical updates' that you require.

Short Answer: Tridion 2013 SP1 is the latest and greatest SDL release and built using the same Architecture as 2011. Content Porter is completely rebuilt and performs much faster and more reliable. In Tridion 2013 the integrations between other SDL products is better (such as Smart Target) and the GUI performs faster. As Jonathan mentions, the documentation has all the juicy details, but in general, don't think twice about it and make a plan to get to 2013 SP1.

Today there is not any good reason to upgrade from Tridion 2009 or 5.x to a Tridion 2011 system. You will have much more support and find more resources online for solving Tridion 2013 SP1 issues and challenges than Tridion 2011.

This year we expect to see Tridion 2015 released, and if you upgrade to Tridion 2013 SP1 then you will be behind the main release by only 1 version. Also, today the majority of customers are on 2013 SP1 or moving to it very soon.

Not the answer you're looking for? Browse other questions tagged 2011 2013 2009 api architecture or ask your own question.