Which Translation Manager hotfixes have we had applied

Someone has asked me this and it's not actually an unusual question.

Situation: problem with Translation Manager in one environment and not another. All other things being equal it seems the resolution is a Hotfix.

In investigation, it seems there's a hotfix and a rollup hotfix containing this and we don't want to overwrite one with another if this will cause a problem!

How can we tell which hotfix has been applied?

At the moment it's up to you to keep track of which hotfixes you install where.

That said, if you are looking at a DLL (e.g. Tridion.TranslationManager.DomainModel.dll), you can tell by the File Version. Not the assembly version, as that doesn't change in a hotfix.

The readme of a hotfix will typically list the file version of the DLLs that are included in the "Distributed files" section. If one is missing, contact Customer Support to get the information (and get SDL to fix the readme file :)).

People are not diligent in recording the applied HotFixes, which is a shame given it causes a right headache later.

Also, note that the order of application is important too - given the same files may be written over several times - one removing functionality of another for example.

The quickest and easiest way to check is to

Taking an example from a TM question just asked:

There are two potential deployments (and, of course, the potential that no hotfix has been applied). Simply comparing the relevant files (as shown in the images below) you can check your own environments and determine the hotfix that was applied. This is always going to be tricky if there's no clear record - as in the example below - the UI Model is the same version in both deployments so you'll have to improve your 'Sherlock Homes' game! 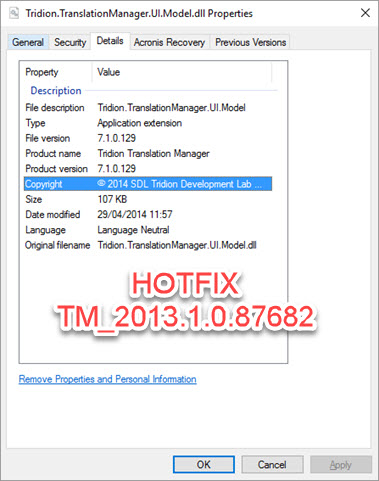 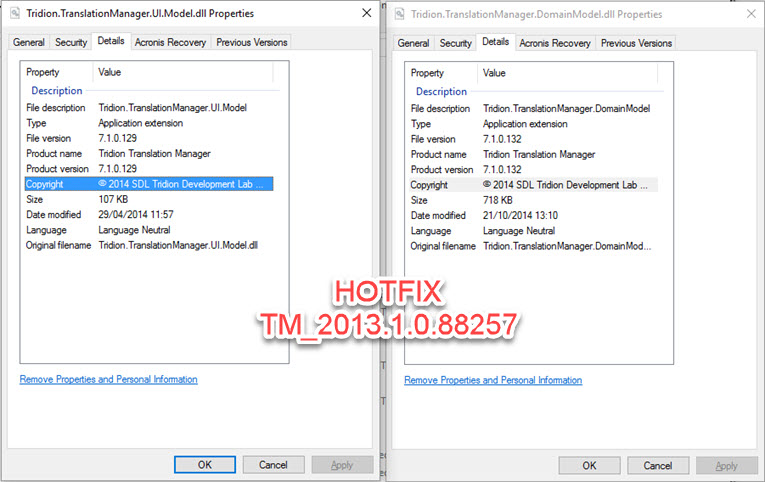 Not the answer you're looking for? Browse other questions tagged hotfix-rollup hotfixes or ask your own question.