We're attempting to run the DXA 1.7 upgrade script on our CM server. At first glance, this looks like an issue with IIS authentication settings, for the SDL Web site or one of its applications. However, we're tried every different combination we could think of (enabling Anonymous authentication for everything, disabling it, enabling/disabling Windows authentication, comparing our IIS settings to an environment where the upgrade script runs without issue, etc.). We also made sure the DXA .zip file was unblocked before unpacking it, as discussed here.

At this point, we suspect it is something to do with Local Security Settings, or some similar issue as described here. However, unfortunately, our server is pretty locked down, in such a way that we don't have access to make changes to local security settings, and getting access may be very difficult.

I was wondering if anyone has suggestions for what else the issue might be or for an alternative approach to getting the CM updated to DXA 1.7. 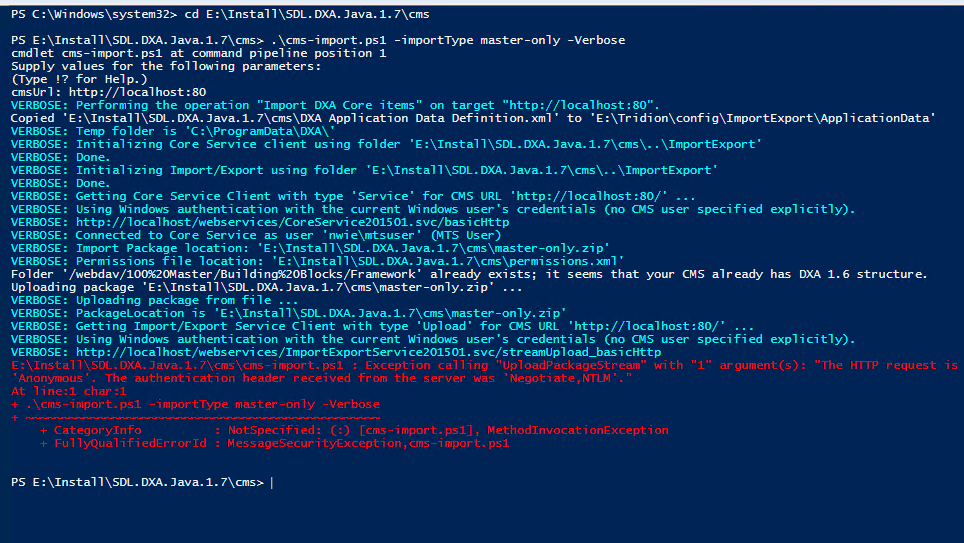 Looking at the provided trace and error, the problem happens on the “stream upload” endpoint of the Import/Export Service: the client doesn’t provide authentication but the server expects it (Windows auth).

The weird thing is that these “stream upload” endpoints are not supposed to use authentication (WCF doesn’t support streaming i.c.w. authentication), so the client is not to blame here.

Please check you IIS configuration for the webservices web app in the SDL Web website. It is supposed to allow Anonymous acces (next to Windows auth), so that some of the endpoints can be accessed without authentication.

Not the answer you're looking for? Browse other questions tagged dxa upgrade dxa-1.7 or ask your own question.