Running Sites 9.0 here and wondering, is it safe to install the latest version of the Sdl.Web.Delivery Nuget Package, 11.0.11022? Are they all compatible with the CD of the respective Tridion version or is there a dependency between certain hotfixes of the CIS-es and these packages.

One other thing which is puzzling is this anomaly. Why is 11.0.1097 updated just recently? Why does it have a newer modified date than the latest version? 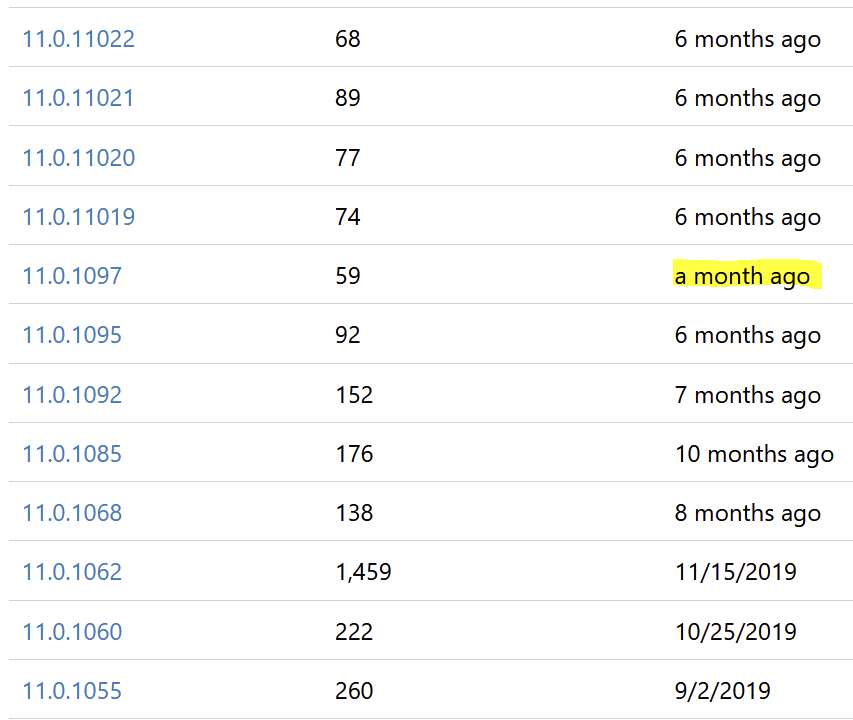 As usual in Service-Oriented Architectures such as CIL/CIS, the client and server versions are rather loosely coupled. That is: there is not a 1:1 relationship between the CIL and CIS versions you can use together.

This answer is intentionally vague; it makes sense to check with Customer Support if you intent to use two quite different versions of CIL and CIS.

Regarding the versioning scheme used for CD NuGet packages: this is ${major}.${minor}.${patch}${build}

If there are multiple builds for a given major/minor/patch version, this means that hotfixes were released for that version. The specific version you're wondering about is a recent hotfix for 11.0.0.

Rick is spot on.

To add some more clarity on that 11.0.1097 release - this was a hotfix for a specific customer. But in general I would use the latest 11.0.1xxxx version available. They are indeed intended to be compatible with all other 11.0.x versions (unless specifically identified by Customer Support).

Not the answer you're looking for? Browse other questions tagged content-delivery sites-9 cil cis or ask your own question.