Has anyone had any luck with making any kind of CSS/UI change on the UI 2012 Experience Manager?

We're currently looking to migration to the Experience Manager 2012, and our editors have pointed out that this form you get when trying to edit a child component is really confusing, since theres no way to distinguish that there are actually three separate options here: 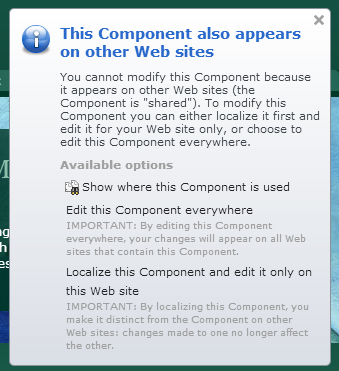 I wanted to add a simple border around the options so its at least easier to tell that this form is actionable, but so far haven't had any luck.

From poking around I'd found a few css file that had the class refernces i was looking for:

However it appears Tridion is either minifying or doing something with the css prior to loading the app, since when I inspect the end page the CSS is being referenced from this location (which doesn't exist as a physical file on the server)

Any insight or ideas would be appreciated.

Just an Update, I can confirm that the file to update is

Then as Bart Mentions you'll need to update the system.config modification attribute and restart to see your css updates take effect.

It is not really supported to modify the CSS files which come out of the box. But I think it would be possible to override the classes you want to modify by adding a stylesheet which is meant to skin the user interface. Details of this you will find in the documentation topic Skinning the Content Manager Explorer (requires login).

I'm not really sure if that will be loaded in for the XPM view too, in case it isn't, then your only option would be to modify the existing CSS files indeed (but you might loose these changes when installing hotfixes or service packs later on). When you have made your changes, you have to make sure that the new CSS is read in again by updating the modification count in the Sytem.config file.

When you increase the modification count, the next time the UI is (re)loaded, all CSS files will be loaded in again once, and then cached (which is where the ?mode=css call comes from).

The Sytem.config file is located in your ..\Tridion\web\WebUI\WebRoot\Configuration directory. Inside the Configuration/servicemodel element you will find a server element with a modification attribute. Just increase the number there by 1 and save the file.

But maybe it indeed is a smarter move to correctly configure the content context as Eric suggests, that way you should never see this dialog.

It is possible to don't receive that popup by configuring the Content Context, in the Dashboard you will find an option to set the publication where components are created/edited.

Not the answer you're looking for? Browse other questions tagged 2011 experience-manager or ask your own question.