I had definied a bunch of content types in the publication properties to be used inside the UI interface. At one point a referenced component was deleted, which apparently is possible, even though it is referenced inside the Content Types overview.

But, ever since when exporting and importing using the Content Porter I have been getting the error:

It will let me export and import, but with errors...

The whole Tridion UI 2012 application seems to be based on configs and webdav urls stored as some sort of data file, but I cannot seem to update, or clear this error.

Nickoli Roussakov helped me look in the right place, but the solution to the issue is rather cumbersome. I solved it without creating script, because I wanted to show the content editor how to solve the issue when it occurs again (and why it happened). 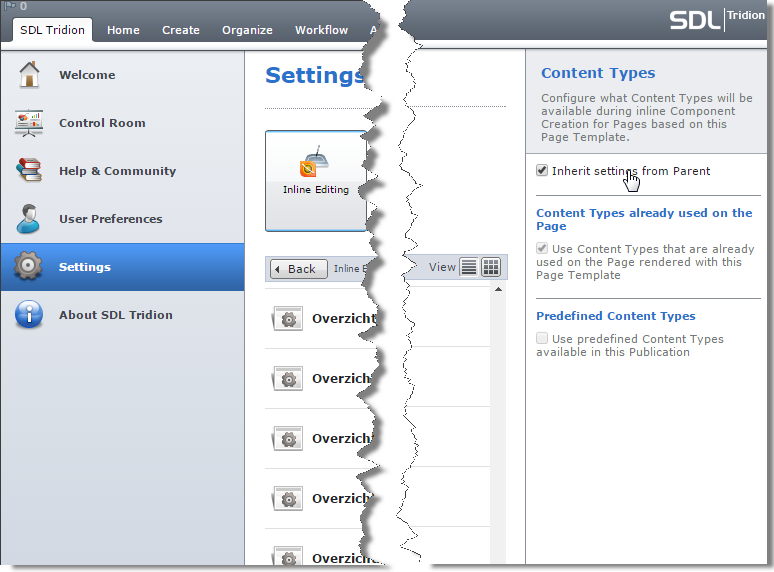 After this you will have to set the predefined content types again and the bad reference will be gone!

Not the answer you're looking for? Browse other questions tagged experience-manager 2011-sp1 content-porter-2009 tridionui2012 or ask your own question.

5
TRIDION UI 2012 GetUserSettings
3
UI 2012 Entity Pages not writable. Error
9
Uploading ASCX files via WebDAV in 2011 SP1
8
What is a good strategy to perform error free content porting?
4
Concurrent Access to session warnings in Event Viewer when creating a page using XPM
3
XPM - The input data was invalid: InitialPublicationDate must not be null
3
Is it necessary install UI 2012 on dedicated Publisher Server?
1
XPM tag: ItemNotFoundException: Unable to find page by url